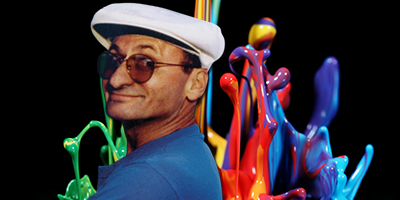 Tommy Tucker Time began with its namesake, Tommy Tucker. He is a veteran of the film set painting in Hollywood, having worked for several renowned studios such as Universal Studios and Warner Brothers. Tommy's talent came to the surface quickly. When he was 12 he amazed his local parish with a magnificent scale model of St. Anne's Roman Catholic Church. In 1972 he went on to receive national acclaim with a 60-foot wall sculpture commissioned by USC Law School.

With all these projects under their founder’s belt, Tommy Tucker Time has grown to be the best source for all types of vintage signs, murals, portraiture, and miscellaneous painting projects. Although the growth and preponderance of computer technology has infiltrated the contemporary art scene, Tommy Tucker Time has stood out for hearkening back to the era when art was a personal, visceral creation of the artist themselves. Their art projects are practically their children; something that is a part of them.

Tommy Tucker himself has summed it up best: "In a time where everything is disposable, hand-painted art, whether it's a painting or a vintage sign, will never lose its value..." This also forms the crux of Tommy Tucker Time’s goal: “Integrated honest consciousness is our reality.” The Las Vegas, NV area has seen this dedication and sincerity first-hand, and they live for the opportunity to use their skills to bring your artistic vision to life. Regardless of the request, Tommy Tucker Time treats every project with affection.

For vintage signage and paintings that come from the soul, Tommy Tucker Time of Las Vegas, NV is your clearest choice. Choose them today for any small- or large-scale painting project you may need!